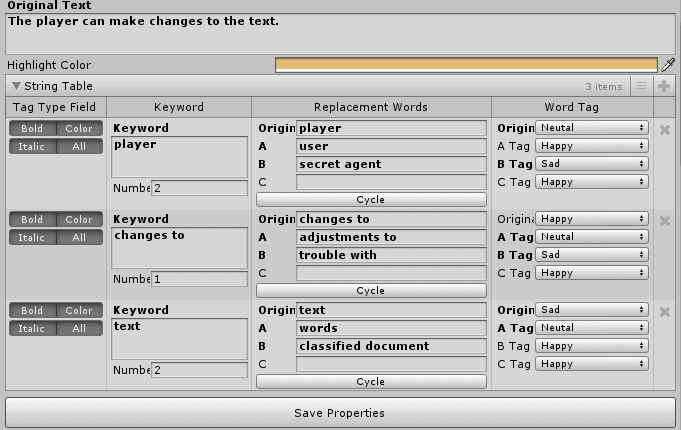 This custom tool was build to manage the text system. It allows the designer to assign properties to keywords (colour, italics, bold), and also to assign tags to words a player may potentially select. Those tags can be used to adjust gameplay moving forward.

Gap Year’s unique story mechanics require a unique approach to script writing. The colour-coded spreadsheet keeps track of the game’s chronology (which skips between 1994 and the present) in addition to game-design concerns, such as animation and interactive objects.

GAP YEAR
Gap Year is a unique interactive narrative experience currently in production. It adapts techniques of graphic novels into a video game structure to create an entirely new kind of storytelling.

Gap Year’s story plays out in multiple panels which subdivide the screen-space and allow the player to track multiple plot lines at once, or see the same scene from multiple perspectives. The game also features an innovative text mechanic in which the player can swap out keywords in the narrative, triggering subtle and sometimes substantial changes in the way the story plays out.

Gap Year tells the story of 19 year old Elin Novak, who treasures living alone in her Toronto apartment until the Czech grandmother she’s never met unexpectedly becomes her new roommate. The two get off to a rocky start, but when her grandmother becomes ill and put on a transplant waiting list, Elin grows up in a hurry as her primary caregiver.

Carl developed the original proof of concept for Gap Year as his game design post-graduate thesis project in 2019. The project is now seeking funding for concept development and production.

Gap Year is targeting a 2021 release.